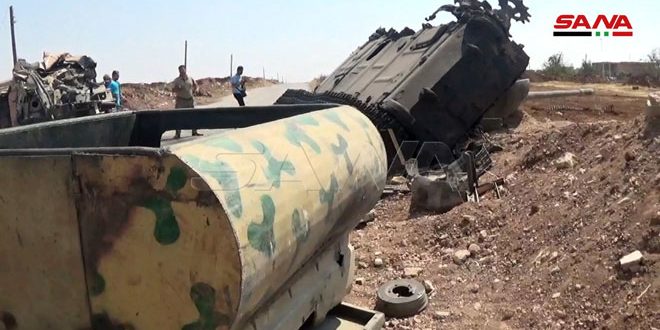 Idleb, SANA – Syrian Arab Army units on Sunday continued operations targeting the positions of terrorists from Jabhat al-Nusra and groups allied to it in Idleb countryside, expanding the area under its control in the western countryside of Khan Sheikhoun in the province’s southern countryside, inflicting heavy losses upon terrorists.

SANA’s reporter said that army operations during the past few hours focused on al-Nusra fortifications and positions in the direction of Kafridon and al-Sabbaghiya in the countryside of Khan Sheikhoun, leaving many terrorists dead or injured while others fled the area.

The reporter said army units carried out artillery and rocket strikes in Kafr Sajneh and al-Naqir, killing a number of terrorists.

To east of Khan Sheikhoun in al-Tamania area in the southern countryside, army units carried out a series of concentrated operaitons targeting terrorists’ positions and supply lines, inflicting heavy losses in personnel and equipment upon them.