Belarusian Ambassador calls for invigorating cooperation and friendship with Syria 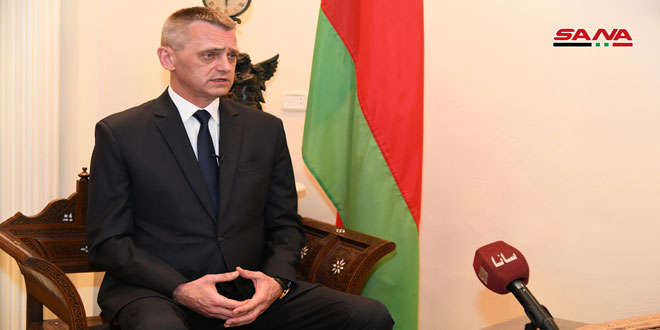 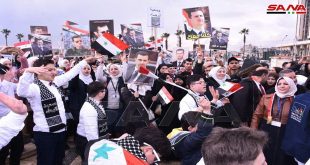 Damascus, SANA- The relations between Syria and Belarus are based on mutual respect between the two friendly peoples and countries and they are rapidly developing due to the “honest dialogue and cooperation between them,” according to the Belarusian Ambassador in Damascus Yuri Sluka.

In a statement to SANA on occasion of his country’s Independence Day on June 3rd, Ambassador Sluka said that his country has always been standing by the Syrian people and leadership in the face of the fierce terrorist attack launched against them from several years.

“We are trying to find more means of cooperation and we are considering the available opportunities for invigorating friendship with Syria in different social, humanitarian, political and economic domains,” Sluka said.

He noted that along with the return of normal life to Syria, Belarus seeks to “encourage businessmen and companies in Belarus to come and contribute to the reconstruction and to building the future of Syria.”

He underlined the importance of the Fair in providing opportunity for businessmen to inspect the situations in the country and to get in direct contact with the Syrian side.

The Belarusian Ambassador noted that his country has sent many humanitarian aid convoys to Syria, the latest of which was sent last February.

He indicated that organizing entertainment journeys to Belarus for the Syrian children is continued, adding that cooperation in the domains of education and culture between the two countries is not new as it dates back to the times of the Soviet Union.

Sluka said that Belarus has provided 10 scholarships for Syrian students this year to study different specialties at the Belarusian universities, underlining the importance of enhancing cultural cooperation between the two countries.