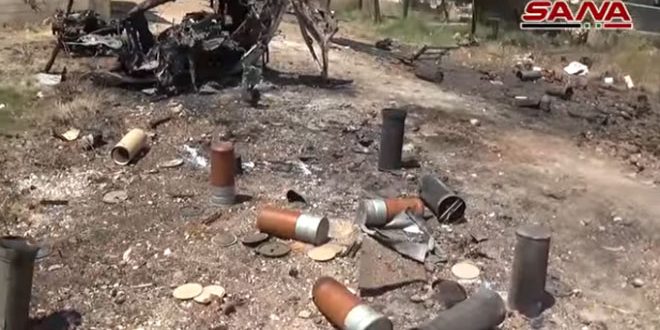 Idleb , Hama, SANA _ The terrorist groups renewed their violations of the de-escalation zone agreement by targeting the safe areas inthe countryside of Hama and Idleb .

SANA reporter said that the terrorist groups, over the past hours, attacked with rockets and shells the safe areas in the vicinity of Kafar Nabboudeh,  Karnaz and al-Hawiz, causing material damage.

The reporter added that the army units immediately responded to the sources of firing the rockets in Kafar Zeita and al-Latamina, which is the most important stronghold of “al-Ezza Brigades” terrorists.

A number of terrorists were killed and their equipment and rocket launch-pads were destroyed.

The army units, the reporter mentioned, conducted precision strikes on the directions of movement of al-Nusra terrorists in the towns of Heesh, Ihsem, and al-Mastoumeh in Idleb southern countryside.

The strikes resulted in destroying  terrorists’ vehicles and equipment and  killing many of them.

The army’s artillery also targeted terrorists of “Jabhat al-Nusra” and other groups affiliated to it in Khan Sheikhoun city, killing and injuring many of them, destroying their vehicles and cutting off their  supply routes.