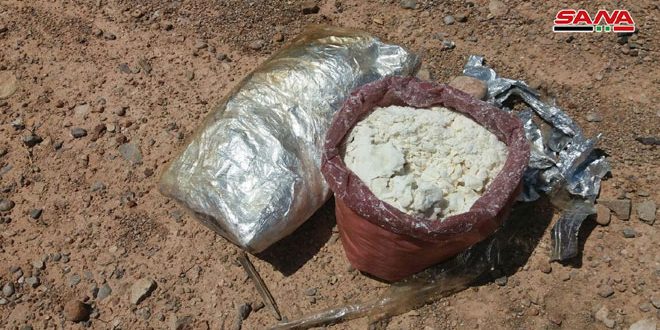 Damascus Countryside, SANA-While combing the areas liberated from terrorism by the Syrian Arab Army, authorities seized tons of the C4 and TNT materials and a large number of explosive devices left behind by terrorists in the area of Beit Jin in Damascus southwestern countryside.

A source at the authorities told SANA reporter that the operations of securing the areas liberated from terrorism by the Syrian Arab Army are continued as over the past few hours, tons of the C4 and TNT materials, tens of explosive devices weighing from 25 to 100 kg and anti-personnel mines and anti-tank mines were found in Wadi Nuhaila in surroundings of Beit Jin village in Damascus southwestern countryside.

The source indicated that the seized materials were hidden under ground to the east of the occupied  Mount Hermon observatory to facilitate the arrival of supplies and logistic and intelligence aid to the terrorists from the Zionist entity.

The source added that terrorists had put the explosive device which were stuffed with C4 in plastic bags and they wrapped them with  tin papers to the facilitate the process of smuggling them and detonating them in the safe residential areas.

To preserve the lives of civilians, authorities, in cooperation with army units positioned in the area and the locals, continue to comb the villages and towns in the countryside of Damascus and Quneitra after liberating them from terrorism to remove the weapons and ammunition and car bombs and to restore normal life to them. 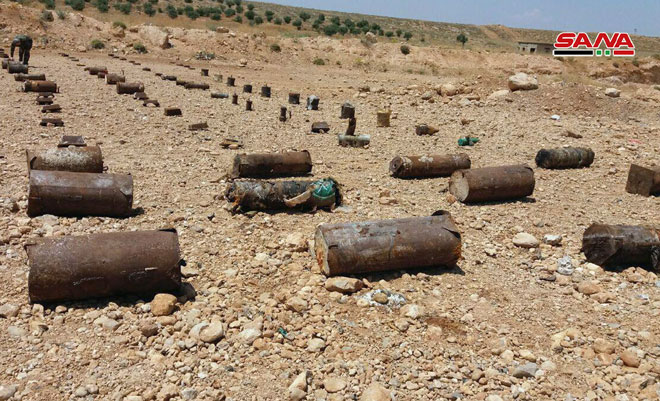 2019-06-12
ruaa-jazaeri
Share
Previous Syrian-Czech archeological expedition to start excavations at Talet al-Shamiya in Lattakia in autumn
Next SANA reporter: Tens of displaced families arrive in Jlaighim corridor coming from al-Rukban camp in Syrian Badyia (desert) where they were held by the US occupation forces and they will be transported to their areas which have been liberated from terrorism.