Nasrallah: Syria has overcome what was plotted against, terrorist organizations are perishing 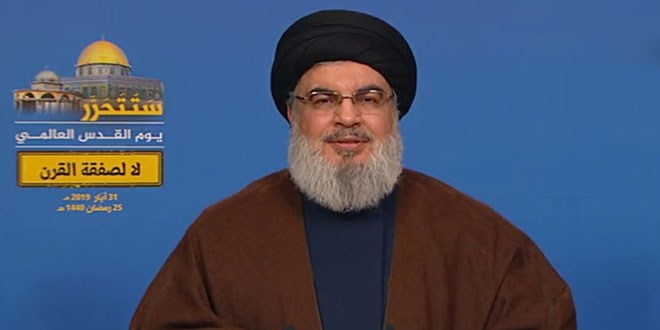 Beirut, SANA – Hezbollah Secretary General Hassan Nasrallah stressed that Syria has overcome the scheme plotted against it, expressing confidence that it will restore its position and power in the resistance axis.
During a ceremony held by Hezbollah to mark Al-Quds (Jerusalem) International Day in Beirut, Nasrallah the terrorists organizations which have been brought to Syria such as al-Nusra Front and Daesh are perishing.
He stressed the need for confronting the so-called Deal of the Century, assuring that the US was mistaken by betting on regional people weariness to impose the deal. “The main challenge today in front of Palestine and Al-Quds is the deal of the century, or Trump’s deal, and it’s our duty to confront it.”
R. Milhem