Two injured due to rocket shells attack on al-Suqailabiye, Mhardeh in Hama 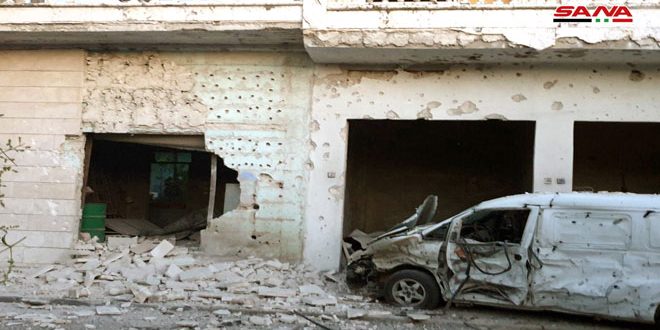 Hama, SANA_ Two civilians were injured as terrorist groups continued their breach of the de-escalation zone agreement by targeting al-Suqailabiye and Mhardeh towns in Hama northwestern countryside with rocket shells .

SANA reporter said that terrorists holed up in Hama northwestern countryside, fired about 22 rocket shells on residential areas and civilian houses in al-Suqailabiye city, injuring two civilians, one of them from the hospital cadre due to the fall of a number of rocket shells on the hospital.

Earlier, the reporter said that terrorists located in the town of Kafar Zeta fired many rockets at the outskirts of Mhardeh town, causing damage to houses and farms.

The army responded by targeting the sources of the attack, destroying a number of rocket launchers and inflicting losses upon terrorists.