Army kills scores of terrorists in Hama and Idleb countryside 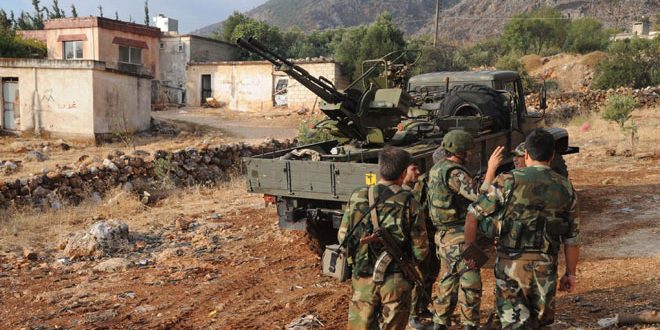 Hama/Idleb, SANA – Syrian Arab Army units on Wednesday targeted dens and gatherings of  Jabhat al-Nusra and groups affiliated to it in Idleb and Hama provinces in response for their breaches of the de-escalation zone agreement.

SANA reporter said that an army unit carried out rocket strikes targeting vehicles belonging to Jabhat al-Nusra terrorists at the outskirts of Tarmala town in Idleb southern countryside, killing a number of terrorists and destroying their vehicles.

Other army units targeted fortified positions of the “Turkistani Party” terrorists in al-Minzar and Khattab hill in the surroundings of Jisr al-Shughour city in Idleb’s southwestern countryside, killing and injuring a number of terrorists and destroying some of their hideouts and positions.

In Hama’s northern countryside, SANA reporter said that army units targeted with rocket and artillery fire vehicles belonging to “Jabhat al-Nusra” and “al-Ezza Brigades” terrorists at the outskirts of al-Madiq Castle and al-Zakat villages and in al-Ankwai village, Jaata town, and the surroundings of al-Qasabiya at Shahashbo mountain, killing a number of terrorists and destroying their hideouts and rocket launchers.