Terrorists and their backers continue to pillage Syria’s antiquities 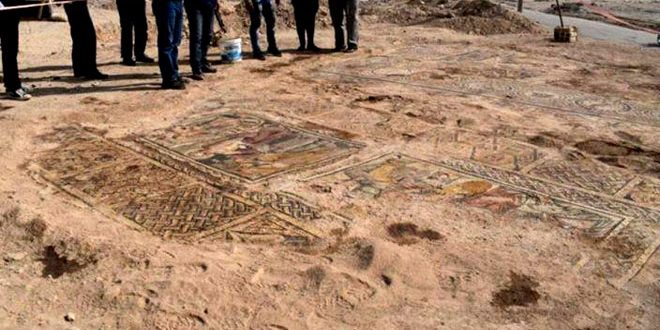 Damascus, SANA-Since the start of the terrorist war against Syria, terrorist organizations and their backers have been stealing Syrian cultural heritage as part of a scheme to lay waste to Syria’s historical treasures.

Most recently, reports of the Directorate-General of Antiquities and Museums revealed an increase in the crimes of digging in search for antiquities in the areas of Manbej, Efreen and Idleb and the sites encircling Raqqa by terrorists and their supporters, namely the US, France and the Turkish regime.

Head of Antiquities and Museums Directorate Mahmoud Hammoud told SANA that US and French forces and the Syrian Democratic Forces (QSD) militias have engaged in excavations and thefts in Um al-Sarj mountain which is rich in antiquities, citing overt excavations and looting in Manbej’s main market.

He added that digging, looting and pillage are also taking place in the ancient tombs located in the eastern part of Manbej city, not to mention other archeological sites completely razed by heavy vehicles.

Hammoud considered these operations a grave violation of the Syrian sovereignty and international conventions and norms which he said are intended to undermine the Syrian cultural identity, indicating that the Directorate is making contacts with the bodies and international organizations concerned to condemn violations against the Syrian heritage.

“We are hopeful that the Syrian army will soon restore security and safety to these areas because it is the only one capable of protecting our antiquities,” he added.

The acts of robbery targeting Manbej’s antiquities which date back to the Hellenistic and Roman eras are another proof which bears testimony to the magnitude of terrorism that has hit the Syrian human heritage.