Al-Moallem: the US uses chemical weapons as pretext to justify aggression on Syria 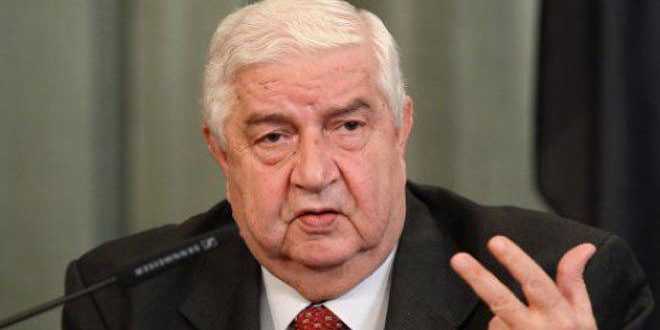 Damascus, SANA – Deputy Prime Minister, Foreign and Expatriates Minister Walid al-Moallem stressed that the US is using chemical weapons as a pretext to justify aggression against Syria.

Al-Moallem said in an interview given to al-Hayat international magazine and published today that it is not the first time the pretext of chemical weapons has been used to justify US aggression against Syria, reiterating that Syria does not possess any chemical weapons.

Minister al-Moallem noted that the staging of fabricated chemical attack and the attempt of blaming the Syrian state for committing it became easy as the “White Helmets” organization has been formed by the British security apparatus and funded by several western countries to serve this purpose and create such scenarios.

In response to a question about the US and its allies’ goals in Syria, al-Moallem noted that the U.S. goals are not related to the US only, rather they are Israeli goals which Washington is implementing in Syria, adding that the US does not want Syria to be the main state in resisting the Israeli entity or to have strategic relations with Iran and Russia.

On preparations for a new Syrian constitution, the minister said that the project is still in its early stages with focus laid on reaching an accord regarding the formation of a constitutional committee whose main mission is to prepare a new constitution.

He said that there is not a unified opposition in Syria; rather, there are different groups whose activities depend on the place of residence of their leaders in western or Arab capitals and whose stances are mainly based on the desire of the hosting states.

Al-Moallem noted that the opposition does not have the choice to make decisions independently and its dialogue with the Syrian government is not built on its own desires and interests.

He underlined the importance of Astana process since it is totally different from Geneva talks in terms of its track and prospects and has contributed to de-escalating tension in various Syrian areas and reaching agreements on some other areas, the last of which is Idleb.

The minister also highlighted the key role of Sochi as part of making Geneva process a success as the city hosted an extended and positive national dialogue that was crowned with tangible results.

Al-Moallem called upon all Syrians who were displaced due to terrorism to return to Syria and take part in the reconstruction process of their country, stressing the government’s efforts to provide all requirements and ensure a decent life for all.

He said that Syria has relied on its friends, Iran and Russia, and they will be given the priority in the reconstruction process, in addition to a number of friendly states like China, India, Malaysia, Brazil and South Africa which expressed their desire to be part of the rebuilding process in Syria.

On Syria’s relations with Arab states and whether it is willing to return to the Arab League, al-Moallem said that the Arab League lost the shape it was established for in 1945, adding that Syria is not interfering in the internal affairs of other Arab states and has never participated in destroying the infrastructure of any state.