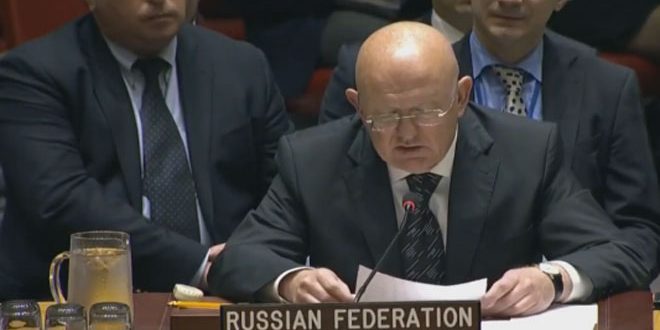 New York, SANA-Russia warned the western countries of launching any new aggression on Syria under the pretext of using the chemical weapon, affirming it will not allow terrorists in Idleb to use civilians as human shields.

“A number of western states are preparing to carry out a military intervention in Syria and launch strikes on governmental sites under the pretext of responding to the alleged use of toxic substances by Damascus,” Russian permanent envoy to the UN Vasily Nebenzya said in a speech at a UNSC session on Tuesday.

He reiterated that Syria doesn’t possess any chemical weapons after it had eliminated them in 2014, a thing that was confirmed by the Organization for the prohibition of chemical weapons.

The Russian diplomat went on to say that the final communique of the summit of guarantor states has affirmed the three states’ commitment to Syria independence and territorial integrity and there is no substitute to the political solution.

2018-09-11
m.eyon
Share
Previous Russian Foreign Ministry: Moscow warns Washington and its allies of taking any dangerous new steps in Syria
Next Ambassador Ala: Syria determined to liberate Idleb from terrorism