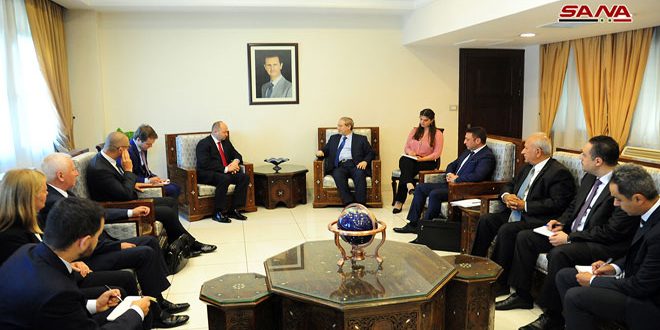 During the meeting, Mikdad affirmed Syria’s high appreciation for the Polish position on the issue of the Syrian refugees and the support that Poland will provide to carry out its responsibilities in this domain.

For his part, Papierz expressed satisfaction over visiting the Syrian Arab Republic with the aim of providing assistance to the Syrian State to receive Syrian refugees by creating favorable conditions for their return to their homeland.

In a statement to SANA, Mikdad welcomed the Polish delegation, the first to visit Syria since the start of the crisis, noting that the purpose of the visit is to discuss a specific project regarding the return of Syrian refugees to their country which reflects Poland’s position on the crisis in Syria.

Mikdad said that Poland’s position is realistic and rational, stressing that this is the right way to help Syria, and dismissing as ‘unacceptable’ linking humanitarian aid to other conditions.

Mikdad said that the two sides discussed during the meeting a number of issues related to bilateral relations and the situation in Syria and the world.

In turn, Papierz affirmed that relations between Syria and Poland date back to the 1940s. These relations did not break during the difficult times and the Syrian Embassy still operates in Warsaw, and there is also a diplomatic representation of Poland at the level of the charge d’affaires in Damascus, he added.

He pointed out that Poland has opposed the plan of a forced resettlement of Syrian refugees within the EU.

“We are of the position that we should help all those who lost their properties, on the ground, here in Syria, and the objective of our visit is to see what is feasible to be done here,” he said.

He underscored his country’s desire to provide a pilot project that can help refugees returning from Lebanon, pointing out that the delegation obtained the necessary information to submit the project.