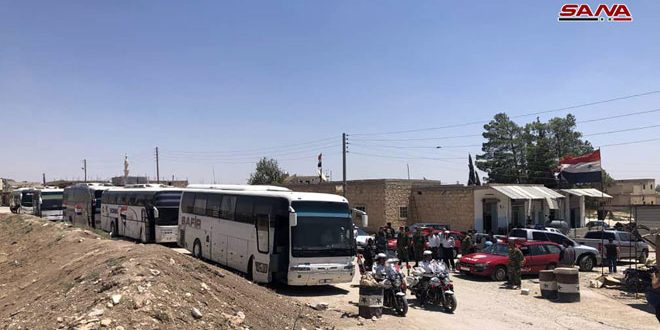 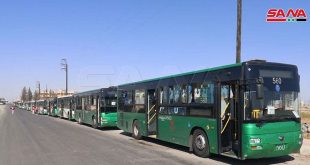 Idleb, SANA – Tens of buses and a number of ambulances on Wednesday entered the terrorist-besieged towns of Kefraya and al-Fouaa in Idleb northern countryside to evacuate the locals via Tallet al-Eis corridor in Aleppo.

SANA reporter in Aleppo said that 121buses and tens of ambulances from Syrian Arab Red Crescent (SARC) have entered since Wednesday morning into the two towns in three batches to transport the locals who have been besieged by the terrorist organizations for over three years.

This process is carried out in implementation of the agreement which was announced yesterday.

The agreement provides for the full liberation of all of those who were kidnapped in the village of Eshtabraq and thousands of the locals of the two towns.

The agreement comes more than two months after liberating 42 kidnapped from Eshtabraq village and evacuating five humanitarian cases in Kefraya and al-Fouaa towns, the reporter added.

The reporter clarified that the buses from Kefraya and al-Fouaa are planned to arrive to Tallet al-Eis corridor during the coming hours, as well as liberating the remaining abductees from Eshtabraq village who have been kidnapped by the terrorists on April, 2015 after a massacre in Eshtabraq in which terrorists killed some 200 civilians while hundreds of the locals in the village fled towrds safe areas on tractors and on foot.

Aleppo governorate has taken all necessary preparations to receive the locals of Kefraya and al-Fouaa towns, as temporary housing centers were prepared and equipped with all services including health, relief and food services, in addition to raising the readiness of hospitals to cure the patients, according to the member of the Executive Office at Aleppo Governorate, Dr. Hamid Kano.