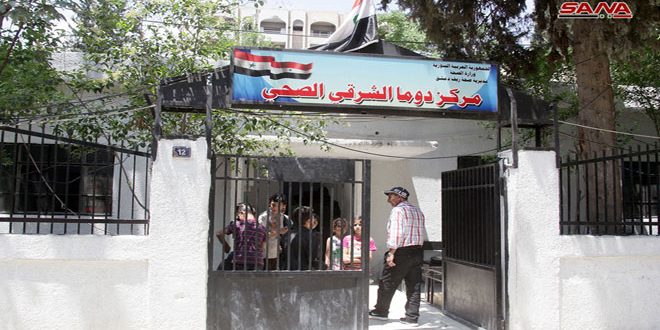 Damascus Countryside, SANA- A month and a half after liberation of Douma city in Eastern Ghouta, the health sector in the city is recovering gradually through its Eastern Health Center, and soon in the Western Health Center, along with community initiatives to share burdens and reduce the considerable pressure on the medical services which remained absent from the area for years due to terrorism.

After Douma was declared clear of terrorism on April 14, technical teams from Damascus Countryside Health Directorate began assessing the damage caused to the health centers and set up a plan to rehabilitate them, beginning was with the Eastern Health Center.

Speaking to SANA, head of the maintenance department at the health directorate Thaer Saad said that the Eastern Center was in a bad shape, and after stability was restored to Douma, repair teams restored it within ten days, becoming ready to receive patients, and it is currently working around the clock to accommodate the considerable influx of patients.

The center has been put into service for about a month and half, and it receives about 300 patients every day and provides vaccines for 350 children under 12 years of age, in addition to nutritional screening for them and management of 260 cases of malnutrition, according to doctor Shaghaf Nahhas.

Nahhas affirmed that all kinds of pharmaceutical items are available, and mobile teams are vaccinating children in the areas distant from the center. 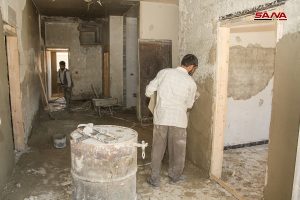 The restoration of the Western Health Center is currently underway, and it should resume providing services within a maximum of 15 days.

The material damage in the center was estimated at about 70%, and work teams are working to rebuild its walls then refurbish it.

A mobile clinic from the Monastery of Saint James the Mutilated also provides medical services and free medicine for patients just a few meters from the Eastern Center.

Dr. Abdulaziz Al-Hajji said the Monastery sent four medical teams to the towns of Eastern Ghouta as soon as security returned to them.

He pointed out that the Douma team receives about 150 cases a day, mostly malnutrition and infections.

The Monastery also set up a room for examining women, giving vitamins and medicine, and providing ultrasound examinations for fetuses.