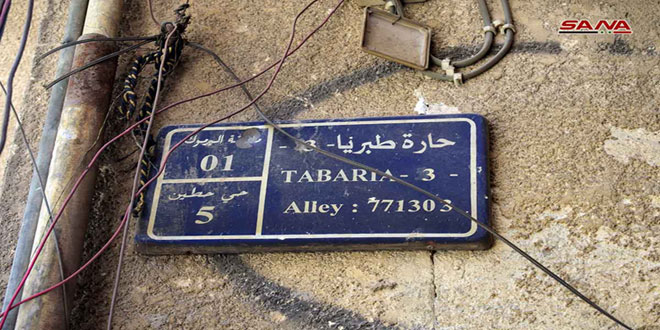 Damascus, SANA-Muhannad did not let the grass grow under his feet when liberating Yarmouk refugee camp from ISIS terrorists became a certainty. A Palestinian and a former resident of the refugee camp near Damascus, he has waited long for this moment.

Taking the route of Palestine Street, the main road in the camp which runs parallel to Yarmouk Street, Muhannad was scanning what used to be residential buildings, shops, cafes and restaurants before ISIS takeover. “This street used to be throbbing with life and vivacity.” A moment of silence passes before he goes on. “They destroyed the camp,” he says. 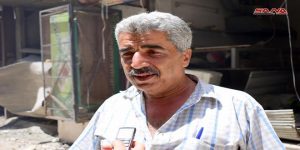 Muhannad was born and raised in the camp. At the end of 2012 when ISIS imposed its rule, he and his family departed, leaving behind “everything”. “We thought we will be returning in seven days. These days became 7 years,” Muhannad tells SANA reporter.

Muhannad’s tour in the camp turned to be a trip down the memory lane. His agitation becomes increasingly visible as he moves past places that served as milestones during his childhood and teen days. Part of his school has been decimated and the other collapsed due to digging operations by terrorists underneath it. 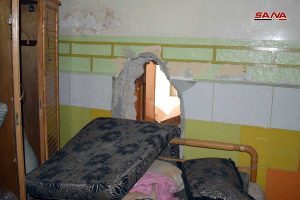 On both sides of al-Ahram streets, narrow alleys branch. A hundred meters away, ‘Tabaria (Tiberias)” neighborhood is located. Muhannad points to the place where he lived. Taking tentative steps, he enters the building from a door left ajar. Chaos is everywhere. A veil of thick dust covers the place. The dim light pouring through two openings in the wall was not enough to read the reaction on his face when he saw his house. He puts his feeling into words, though: “I don’t know. I am happy because I am at my house. But I am sad, too.”

He inspects some pieces of furniture, speaking as if to himself: “These are not ours. Some of these are stolen. Others have been relocated.” Passing his hand across the dressing table in the bedroom, he then pulls it away, horrified. “Oh my God! A handcuff! They have turned our house into a prison.”

After he regains composure, Muhannad moves on to examine the wardrobe, excited at the thought of recovering his little sister’s dresses which he thought would make her happy, before he remembers that she was only two years old when they left the camp. “They no longer suit her,” he says, smiling. Opting for another plan, he takes some clothes for his mother, putting them in a bag, along with a set of books, crystal cups and an iron.

As he prepares to leave, Muhannad takes few photos of the place as an attempt to “document this passing terrorism.” The camera lens takes snapshots of the kitchen, bathroom, living room, now all a pile of debris.

Nearby, Ersan Hamdan, a father of seven, stands lamenting the destruction. “The camp is ruined. What matters is that we got rid of them,” he says.

Tasneem al-Saadi, a former resident of al-Quds Street, says as she inspects the damage: “Nothing is better than safety. May God protect the Syrian army.”