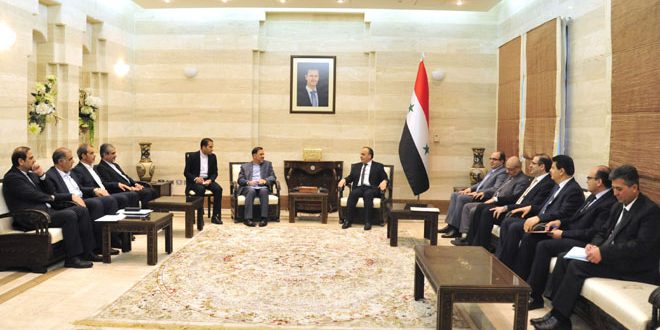 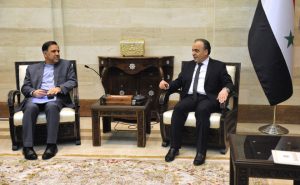 The Premier said that the Syrian government is ready to provide all facilitations and overcome obstacles to the Iranian participation in the upcoming stage.

He indicated that the work according to the free trade principle is a priority, pointing out to preparations being made to organize an economic forum by the private sector of both countries as an indication of Syria’s keenness to bolster the economic relations with Iran at the official and private levels.

For his part, Akhoundi affirmed the need for devising a plan to implement the signed programs between the two sides, form a committee tasked with following up and monitoring the implementation of the agreements in the long term.

He noted the importance of bolstering partnership between Syrian and Iranian companies and cooperation among banks.

In a relevant context, Minister of Economy and Foreign Trade Mohammad Samer al-Khalil discussed with Akhoundi the implementation of the free trade agreement, the revitalization of foreign trade and free zones and the possibility of joint investment in the free zone at Hasya industrial city.

Earlier, Public Works and Housing Minister, Hussein Arnous, discussed with Iran’s Roads and Urban Development Minister, Abbas  Akhoundi, the prospects of cooperation between Syria and Iran during the rebuilding phase. 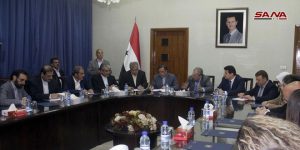 Arnous said that developing joint work between Syria and Iran is important for both countries in the upcoming reconstruction phase, especially that Public Works and Housing Ministry is reviewing the organizational charts of cities and towns destroyed by terrorism.

He added that the Ministry needs heavy equipment for executing construction in an optimal way.

For his part, Akhoundi who is also head of the Joint Syrian-Iranian Economic Committee, asserted his country’s support for Syria in various field sand Iran’s readiness to contribute to rebuilding, developing, reconstructing, planning, and reorganizing the Syrian cities.

The Iranian Minister and the accompanying delegation added that Iran has the necessary expertise in the field of building and establishing roads and bridges, calling for discussing slum upgrading projects in particular and reconstructing infrastructure in general.