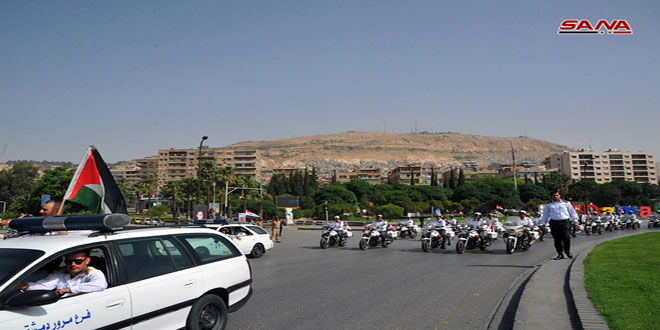 Damascus, SANA- General Traffic Department at the Ministry of Interior organized a festival with the participation of traffic police bicycles and cars marking the World Traffic Day.

The event, which is held in Umayyad Square in Damascus on Friday, aims at explaining the general traffic rules and raising awareness among citizens to abide by these rules and avoid road traffic crashes and their consequences on the lives of the citizens.

Speaking to SANA, Lt. Naseem Mohammed clarified that abiding by the traffic rules saves lives and properties , calling on the drivers and passers-by to cooperate with the traffic policemen in implementation of the rules to protect people from crashes.

Mohammed indicated that the number of deaths resulted from traffic accidents is estimated about to 100 persons, not to mention the injuries and the damage caused to properties, according to the statistics in Damascus Traffic Branch .

World Traffic Day is celebrated on May 4th every year and it was celebrated after the international community warned of the huge increase in the number of traffic accidents.