Al-Jaafari: If the US, Britain, and France think of attacking Syria, the Syrian people will confront them 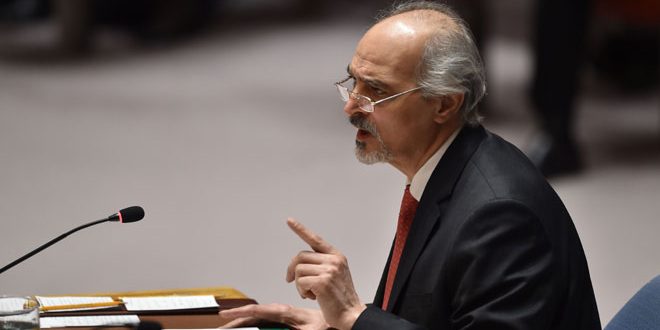 New York, SANA – Syria’s Permanent Representative at the UN Dr. Bashar al-Jaafari said that if the US, Britain, and France think they can attack Syria and violate its sovereignty, the Syrian people will confront them and will not allow anyone to transgress upon their country’s sovereignty.

During a Security Council session held on Friday upon Russia’s request to discuss the US threats about attacking Syria, al-Jaafari said that the US Representative claimed that the Syrian government used chemical weapons 50 times which led to the death of 200 civilians, describing this as amateur talk fit for children’s comic books, because it makes no sense that a government would use chemical weapons 50 times to kill 200 civilians.

He said that it’s wrong to think that the massive Western forces gathered in the east of the Mediterranean are motive by love for a number of terrorist thugs in Douma – who incidentally left that city and headed north from which they will head to Saudi Arabia then Yemen where they will be recycled and use in other fronts . No, these forces target the Syrian state and its allies.

Al-Jaafari recalled how the US used millions of gallons of Agent Orange in Vietnam in 1961, which killed and injured millions and still causes birth defects to this day, and that US forces killed thousands of Syrians in Raqqa and thousands more in Iraq using white phosphorus, which is a type of chemical weapon.

He quoted George Orwell who said that “In a time of universal deceit – telling the truth is a revolutionary act,” saying that today the US, Britain, and France are dragging the world to war and seek to undermine the Security Council’s role of preserving international peace and security.

Syria’s Representative stressed that the UN Charter stipulates for the members to refrain from threatening the use of force of using it against the territorial integrity or political independence of any state, adding “I would clarify here that the history of these three states is built on using lies and fabricated stories tow age wars in order to occupy states, seize their resources, and change governments in them by force.”

He cited the invasion and occupation of Iraq based on an American lie used at the Security Council 15 years ago, and also noted that France exploited the Council to destroy Libya because its then-President wanted to cover up his financial corruption, and yet some states still fall for the same lies now being used to justify an aggression on Syria.

He went on to say that after the US, Britain, France, and their pawns in the Middle East failed to achieve their goals in Syria by supporting terrorist groups, now they boast about how “gentle, smart, and modern” their missiles are, defying international legitimacy at the Council and sending their fleets and warplanes to achieve what their terrorist pawns failed to achieve throughout the past seven years.

The Syrian government liberated thousands of civilians in Eastern Ghouta from terrorist groups that had been using them as human shields and besieging them for years, depriving them of food and medical aid and using their homes, schools, and hospitals as bases from which to attack 8 million civilians in Damascus, al-Jaafari added.

“Some adventurists are pushing international relations to the brink of disaster based on a fake video staged by the ‘White Helmets’ terrorist organization upon instructions from Western intelligence agencies,” he said, noting that the aforementioned White Helmets are the media arm that uses fabrication and falsification to benefit terrorism, much like the warplanes of the so-called “international coalition” were used to benefit Daesh (ISIS).

He noted that the Syrian government invited the Organization for the Prohibition of Chemical Weapons (OPCW) to send a fact-finding mission to the site of the alleged incident in Douma, providing all facilitations so that this team can conduct its work with transparency and accuracy, and this team should begin its work within hours, adding “this invitation came from a position of strength, confidence, and diplomatic experience, not from weakness, fear, threats, or intimidation.”

“If the United States, Britain, and France believe or think that they can attack us and violate our sovereignty, then we will have to apply Article 51 of the UN Charter which gives us the justified right to defend ourselves. This is not a threat, like how they threaten us; this is a promise. We will not allow anyone to violate our sovereignty,” al-Jaafari affirmed. 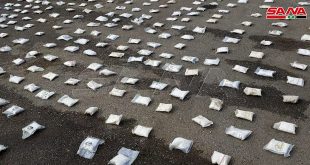