Nasrallah: With every major victory against terrorism in Syria, an alleged use of chemical weapons is staged 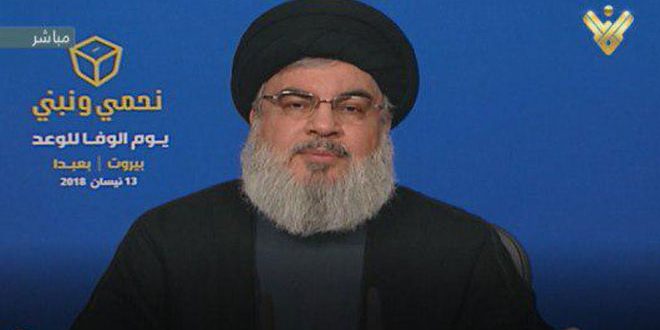 Beirut, SANA – Secretary General of Lebanon’s Hezbollah, Sayyed Hassan Nasrallah, said that the developments targeting Syria could have repercussions on the entire region.

In a speech on Friday, Nasrallah said that with every major victory against terrorism in Syria, an alleged use of chemical weapons is staged by the sponsors of terrorism, like what happened in Douma recently, wondering why a victor would resort to using such a weapon.

In response to US President Donald Trump’s threats of attacking Syria, Nasrallah said that the world must now that such threats never have and never will intimidate Syria or Iran or Russia or the region’s movements and peoples.

He said that Trump is considering a war against an axis that has achieved victories while America has suffered a series of defeats, stressing that the world should be worried with someone like Trump being a president, as it’s hard to understand what he wants and what he thinks, and he is a reactive personality known for talking uncalculated positions.

Referring to the Israeli aggression on the T4 airbase in Syria, Nasrallah said that the Israelis made a historical mistake and a grand folly with this blatant attack, and that it will have serious consequences.