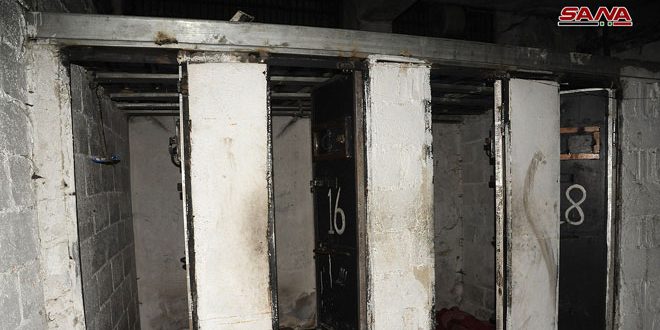 Damascus Countryside, SANA- A prison and a main site for the so-called “Failaq al-Rahman” were discovered by the Syrian Arab Army in Zamalka town in Eastern Ghouta.

SANA’s reporter said that the army’s units found one of the main sites of “Failaq al-Rahman” which included a military operation room as well as machines to print maps and equipment to measure distances used by terrorists in digging tunnels.

The site also includes a long tunnel running under the buildings used by the terrorists’leaders to move, store weapons and ammunition and hide from the blows of the Syrian Arab Army.

During the sweeping operation in one of the town’s neighborhoods, an army unit found the so called “the 44th Prison” which was used by the terrorists to torture the abductees of the townspeople and abuse them, noting that the prison contains rooms, small cells, files and documents recording the number of abductees and orders for the use of forced labor and taken to the hubs of fighting to dig tunnels.

The town of Zamalka was the main hotbed of “Failaq al-Rahman”. During the past days, army units had discovered a number of tunnel networks, warehouses and workshops for the manufacture of missiles, which were used by terrorists to attack the residential areas in Damascus and its surroundings.

Meanwhile, units of the Syrian Arab army discovered a depot for manufacturing explosive devices and booby traps from Daesh remnants as they continued combing operations of Sbaikhan village in the eastern countryside of Deir Ezzor.

A military source added that large amounts of explosive devices and western-made ammunition have been seized inside the depot, in addition to light weapons, mortar rounds of different sizes and anti-tank missiles.

The Syrian Arab Army carried out precise artillery bombardment  evening targeting the fortified positions and movements of the so-called Jaish al-Izzah terrorists, positioned in Kafer Zaita village in Hama countryside, destroying their hotbeds and killing a number of them.

SANA’s reporter said that the army units also carried out a series of bombardment against terrorists of the so-called the Turkistani Party, positioned in al-Zaqqoum town in Hama countryside, inflicting heavy losses upon them and destroying their hotbeds and vehicles.

The correspondent added that army units engaged in intermittent clashes with the terrorist organizations in the village of Taqsis in Hama southern countryside, inflicting heavy losses upon them.