Moscow, SANA- Russian Foreign Ministry Spokeswoman Maria Zakharova said that the operation to eliminate terrorism in Eastern Ghouta is almost done, expressing Moscow’s concern over the US attempts to prolong its military presence in Syria.

Zakharova stated that Russia, in coordination with the Syrian government and Syrian Arab Red Crescent (SARC), secured the exit of more than 135 thousand civilians besieged by terrorists through safe corridors in Eastern Ghouta.

“The continued allegations against the Syrian government and Russia of using power randomly and targeting civilians are mere falsity whose mongers pretend to care for civilians’ lives while their lies create obstacles in the path of reaching negotiated solutions and saving human lives,” said the spokeswoman.

Zakharova called on the UN organizations to continue to provide aid for the affected civilians in Eastern Ghouta after liberating it from terrorism with the same vigor that characterized their work when Ghouta was under terrorists’ control.

She added that Russia is concerned over the US and its allies’ attempts to prolong the US illegal military existence in Syria, especially by dispatching heavy weaponry to al-Tanf area controlled by the US in southern Syria whose boarders it has drawn arbitrarily. 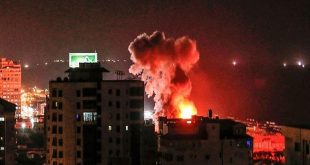 Update-Scores of Palestinians martyred, wounded in Gaza and West Bank as Israeli occupation escalates its attacks on the besieged Strip

Occupied Jerusalem, SANA- Four Palestinians were martyred in Israeli air aggression on the central  and …