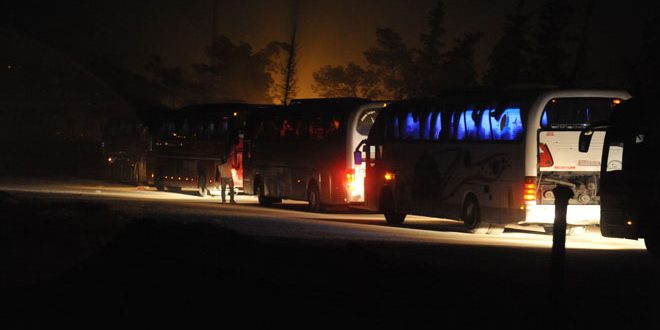 SANA’s correspondent to Erbin Corridor said that 89 buses carrying 5290 persons, including 1374 terrorists from Jobar, Zamalka, Erbin and Ein Tarma in eastern Ghouta headed for Idleb under the supervision of the Syrian Arab Red Crescent (SARC).

The Correspondent added that the evacuation of the terrorists and their families from these towns will continue till evacuating all terrorists who reject the national reconciliation and clearing the eastern Ghouta of all armed manifestations to pave the way for the maintenance workshops to enter the area and to restore the state institutions in it.

Measures to evacuate the 5th batch of terrorists from Jobar, Zamalka, Erbin and Ein Tarma started early this morning as buses were gathered at Erbin corridor.

Meanwhile, local sources in Douma stressed that demonstrations demanding terrorists of the so-called Jaish al-Islam to leave the city and to release the kidnapped people broke out across the city in parallel with the exit of 1700 civilians from Douma through the safe corridor leading to al-Wafideen camp as the army units, in cooperation with SARC and Damascus Countryside governorate, received them and transported them to makeshift centers.