Update-13 civilians killed, 77 injured in shelling attacks by armed groups on Damascus and its countryside 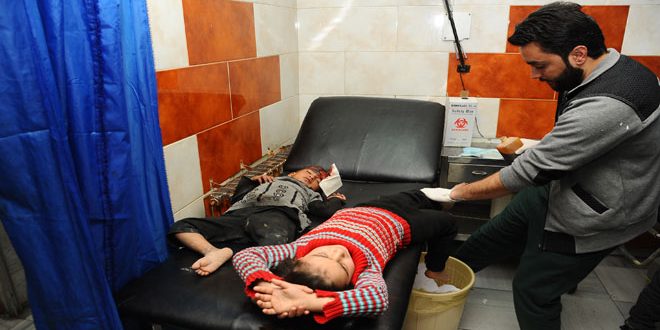 Damascus countryside, SANA- 13 civilians were killed and 77 others were injured on Tuesday as armed groups in the Eastern Ghouta area continued their breach of the de-escalation zones agreement, targeting residential areas and public facilities in Damascus and its countryside with 114 rocket and mortar shells.

A source at Damascus Police Command told SANA that tens of rocket and mortar shells fired by armed groups fell in the surroundings of al-Tahrir and Umawyeen Squares and in al-Abbasyein, Bab Touma, al-Sha’alan, al-Bramkeh, and al-Qassaa areas, leaving scores of civilians dead and others injured.

The source added that the shelling attacks launched by armed groups on residential areas in Damascus also caused material damage to the cars and the public and private properties.

Earlier on Tuesday morning, a rocket shell fired by armed groups landed on al-Abbasyein area, injuring a number of civilians, while others were killed due to shelling attacks on the vicinity of al-Tahrir and Umawyeen Squares.

Earlier in the day, a number of shells were fired at the surroundings of al-Rae’es square in Jaramana city injuring many civilians and causing material damages.

In the morning, SANA’s reporter said that mortar shells landed in agricultural fields in Jaramana area, causing damage to the crops and equipment used by the farmers.

The reporter added that Syrian Arab Army units responded to the attacks by targeting with precise strikes the areas from which shells were fired, destroying a number of rocket launchers and fortified positions and inflicting heavy losses upon the armed groups.