Nasrallah: The US preserved part of Daesh to employ it in its aggressive scheme against Syria 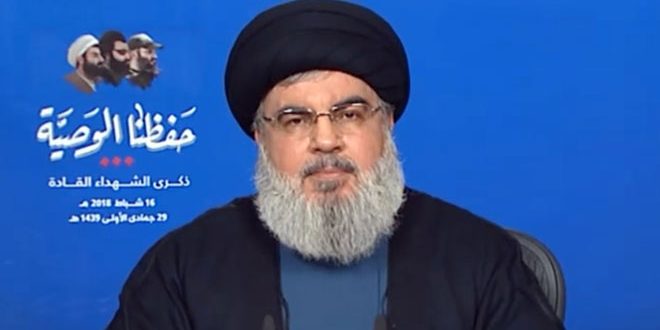 Beirut, SANA- Secretary General of Hezbollah Sayyed Hasan Nasrallah said that the US preserved part of Daesh (ISIS) terrorist organization in Syria to employ it in its aggressive scheme against Syria.

In a speech on Friday, Nasrallah said that the US military troops did not leave the area after the elimination Daesh terrorist organization in it; rather it preserved part of Daesh terrorists in the north and east of Syria and provided a safe shelter for them to implement the US scheme in Syria.

The presence of the US military troops contradicts what Washington stated when it claimed that its troops’ presence is linked to the elimination of terrorism, he added.

Nasrallah stressed that one of the reasons for targeting Syria is the existence of huge natural resources in its land and sea, and the Americans maintain their presence east of Euphrates River because the biggest oil and gas wells in Syria are located in that area.