About 6,000 civilians killed as a result of US-led coalition airstrikes in Syria and Iraq 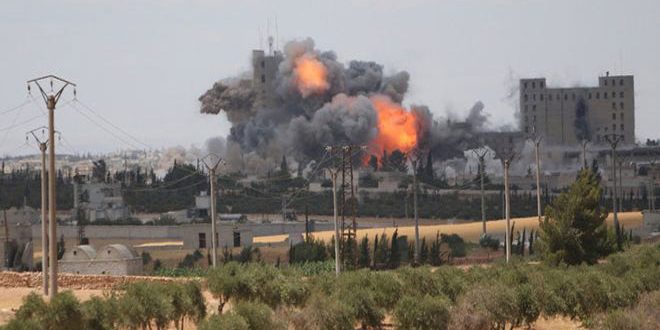 London, SANA – The strikes of US-led international coalition killed as many as 6,000 civilians in Syria and Iraq in 2017, more than three times the number of victims in the year before, according to Airwars organization.

Airwars, a London-based NGO, said that the coalition strikes moved in 2018 to more densely-populated urban centers with the claim that Daesh (ISIS) controls them, which raised the number of civilian causalities drastically.

The organization’s report, based on media outlets, social media, and other information sources, said that between 3,923 and 6,102 civilians were “likely killed” by air and artillery strikes carried out by the US-led coalition in 2017.

The report indicates that the number of civilian victims is vastly higher than the figure put forward by the U.S. Central Command, which claimed in its most recent public report that around 817 civilians have been killed since the air campaign began in 2014.

airstrikes Airwars Iraq Syria US US-led Coalition 2018-01-19
maya
Share
Previous Nasrallah: The US created Daesh to justify its return to region
Next Russia: US attempts to blame Syrian government for chemical attacks devoid of any logic