Nasrallah: The US created Daesh to justify its return to region 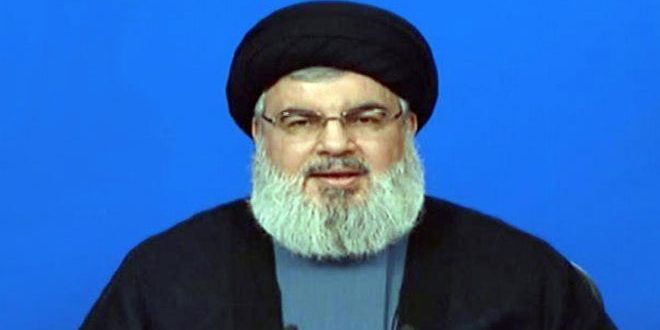 Beirut, SANA – Secretary General of Hezbollah, Sayyed Hassan Nasrallah, affirmed that the US has created Daesh (ISIS) terrorist organization to justify its return to the region after its withdrawal from Iraq.

“The announcement of US Secretary of State, Rex Tillerson, on his country’s keeping its troops in Iraq and Syria under the pretext of preventing the return of Daesh proves the US objectives in the region, especially after the Iraqi people and the Iraqi resistance drove them out and refused to give them military bases and under the same pretext they came to Syria and they want to remain in it,” Nasrallah said in a speech on Friday.

He added that what the Americans are saying about their efforts to prevent the return of Daesh is just hypocrisy and that the Iraqis and the Syrians are able to prevent Daesh return and what the US Secretary of State claims is lies, hypocrisy and misleading.

Daesh Nasrallah US 2018-01-19
ghossoun
Share
Previous Preparations for Syrian National Dialogue Congress in Sochi reviewed
Next About 6,000 civilians killed as a result of US-led coalition airstrikes in Syria and Iraq