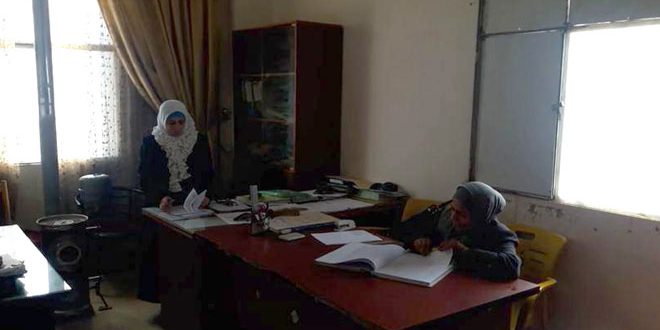 Deir Ezzor, SANA – In an rapid mode, life comes back to Deir Ezzor and its citizens have been returning after the Syrian Arab Army and the allied forces restored security to the province and expelled Daesh terrorist organization (ISIS) out.

Since the first day, the government started the rehabilitation process at a fast pace, including rebuilding the devastated infrastructure, clearing of rubble and the wreckage, opening the roads, securing food in the market, and restoring services.

“The return of the employees to Deir Ezzor reflects their desire to contribute to the rebuilding process and recover the role of the institutions in the province to be ready to provide services to citizens,” one of the returned employees said.

Head of the training department of the Technical Services’ Directorate in Deir Ezzor said that she was forced to leave her work in the city and moved to Damascus because of ISIS threat, but now she returned to her hometown after restoring security anArmyd stability by the Army.

“We, as employees and citizens, should return to rebuild what terrorism has done,” she added.

Moreover, a number of Technical Services Directorate employees in the province of Deir Ezzor who came back to their jobs, called upon all employees and citizens who left Deir Ezzor to return “to be real partners in the rehabilitation process in their hometown.”