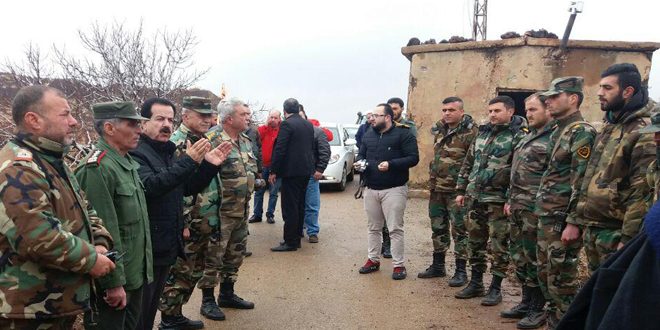 Quneitra, SANA- In appreciation of their heroism and sacrifices in defense of the homeland, the city of Quneitra honored on Wednesday one of the formations of the Syrian Arab Army operating in al-Toloul al-Homr in the northern countryside of Quneitra.

On Tuesday, units of the Syrian Arab Army fixed their points in the strategic area of al-Toloul al-Homr to the east of Hadar town, which has been subjected to dozens of terrorist attacks over the past few years.

Quneitra 2018-01-03
Manar
Share
Previous Mikdad: Failure of enemies’ plots in Syria pushed them to stir riots in Iran
Next The army destroys site for Jabhat al-Nusra in Wadi Anz, Hama