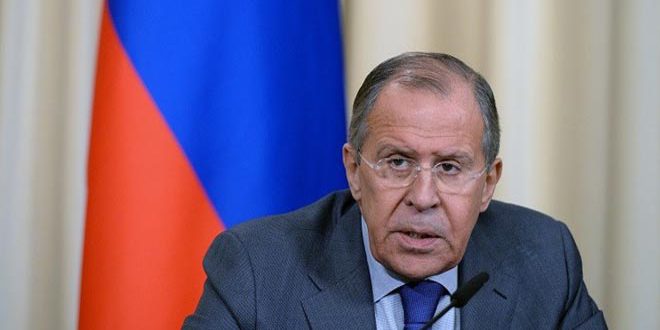 Speaking to Interfax news agency on Thursday, Lavrov added that the UN Security Council has not approved the work of the United States and the coalition it leads in Syria, nor has been invited by the Syrian legitimate government, emphasizing that they (Russian side) are Judging from the fact that the Americans should leave the Syrian territory once the remnants of the terrorists are completely eliminated and that will happen very soon.

On the statement of the US Defense Secretary, James Matisse, about the intention of US troops to stay in Syria until achieving progress in the political settlement, Lavrov pointed out that such statement is “surprising” because it means that Washington reserves the right to determine the progress and wants to keep control over part of Syrian territory to achieve the result it wants.

The Russian minister affirmed that according to the UNSC No.2254, which the United States supported, the decision on the future of Syria can only be taken by the Syrian people and this is what Moscow will start with in its contacts with the Americans later.

He also expressed his satisfaction that cooperation with the US in Syria is possible if the Americans’ goal is to fight terrorism.

Lavrov US forces 2017-12-28
ghossoun
Share
Previous Workshop on gender-based violence at Education Faculty, University of Damascus
Next Member of House of Lords Baroness Cox calls on UK to reopen its embassy in Damascus