Bogdanov: Washington’s justifications for US troops’presence in Syria unacceptable 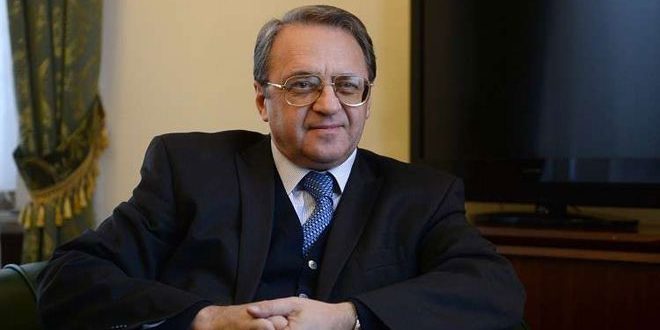 Moscow, SANA- Russian President’s special representative to the Middle East and North Africa, Deputy Foreign Minister, Michael Bogdanov, stressed that the US justifications to keep its  forces in Syria are “unacceptable and rejected”, particularly after eradicating Daesh (ISIS)  terrorist organization.

Russian mass media on Tuesday quoted Bogdanov as saying that Justifications for the presence of the US forces in Syria are unacceptable and raise many questions, emphasizing that there is
no excuse for their presence after we declared victory over Daesh.

The Russian diplomat pointed out that the Americans present new reasons that are rejected by Moscow and they have no legal justification to be on the Syrian territory.

From the other hand, Bogdanov reiterated the need for holding the Syria National Dialogue Congress in the Russian city of Sochi under the UN auspices and in light of key role by the UN, asserting that all Russian efforts exerted to solve the crisis in Syria are based on the
UN Security Council resolution no. 2254.