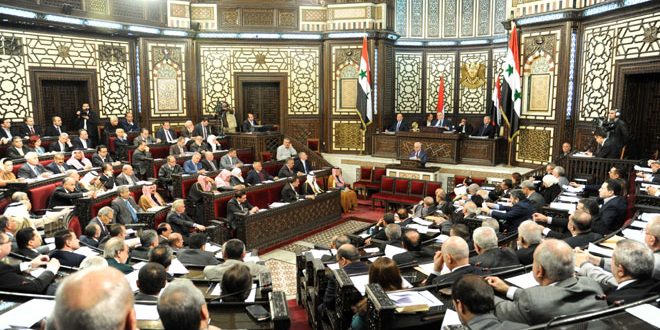 Damascus, SANA – The People’s Assembly held on Sunday a session, chaired by Speaker Hammoudeh Sabbagh, discussing the report of the Budget and Accounts Committee on the bill for the State General Budget for the fiscal year 2018.

Head of the Committee, MP Hussein Hassoun, affirmed that the Committee made to a number of general recommendations addressed to the government.

The Committee stressed the need to address firmly the issue of high prices, put an end to the monopolists and manipulators of prices, link wages to production, stimulate producers, reconsider tax policies, and rationalize public spending.

In turn, MPs called for enhancing the support provided to families of martyrs and wounded people, increasing salaries and wages for workers in the state, improving the living standards of citizens, securing their basic needs at appropriate prices, and reducing the prices of oil derivatives, demanding the government not impose any new taxes or fees on citizens.