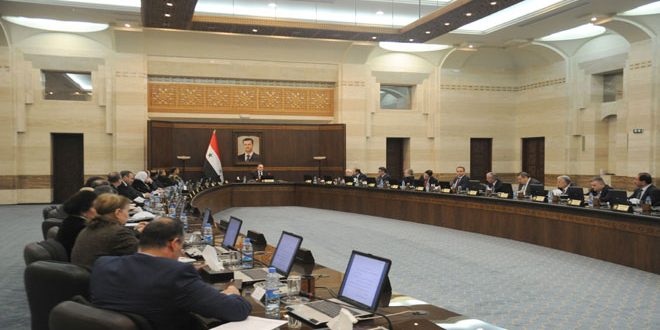 Damascus, SANA – In its weekly session chaired by Prime Minister Imad Khamis on Tuesday, the Cabinet decide to reconsider the permission for Customs officers to enter shops within cities, tasking the Ministries of Finance and Economy & Foreign Trade to hold meetings with businessmen to listen to their suggestions on formulating new instructions in this regard.

The Cabinet approved a bill on reconstituting missing or damaged real-estate documents and considering them legally valid in order to preserve citizens’ rights and re-stabilize the real-estate sector.

Another bill was approved allowing standing facilities that have not yet received administrative licensing to carry out their activities temporarily, in addition to a bill on amending the fees for building ships, registering them, transferring their ownership, and other fees imposed on ships that enter Syrian docks or drop anchor in Syrian territorial waters.

The Cabinet also approved a bill on amending the consular fees for granting and renewing passports and travel documents for Syrians residing abroad, adding a category allowing an immediate and expeditious issuing of passports, along with the possibility of issuing the passport within Syria to families and people with the power of attorney.

The Cabinet instructed the Public Works and Housing Ministry to reactivate the work of the Regional Planning Agency to play a role in the reconstruction stage, and approved a request from the World Food Program (WFP) to allow UN humanitarian agencies to import limited quantities of fuel from Lebanon.

It also tasked Ministries to increase communication with participants in expos held in Syria, to improve the work of the duty-free zones, and evaluate the state of the eastern seaside corniche in Tartous, in addition to approving a decision to license a number of newspapers and publications.

The Cabinet also touched on the liberation of Palmyra from terrorism by the Syrian Arab Army, denouncing the methodical vandalism carried out by terrorists in the city’s archeological sites.