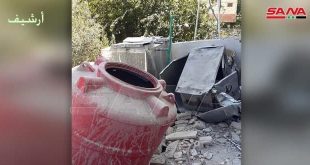 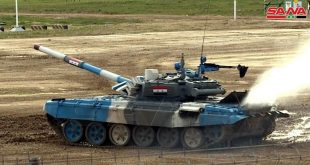 Damascus, SANA-The General Command of the Army and Armed Forces announced on Thursday that units of army re-established control over the city of Tadmur (Palmyra) after inflicting heavy losses upon ISIS terrorist organization in personnel and equipment.

The Army’s Command said in a statement that the army units, in cooperation with the allied and backing forces, re-established control over the city of Tadmur (Palmyra) and the areas surrounding it following a series of successful military operations, supported by the Syrian and Russian air forces.

It added that the engineering units meantime are dismantling IEDs planted by terrorists before they were expelled.

The General Command affirmed that the importance of this achievement lies in the historic and civilized status of the city of Palmyra and its synchronization with the victories of the Syrian Arab Army in the northeastern countryside to the city of Aleppo which dealt a severe blow to ISIS terrorist organization that began to collapse under the strikes of the army.

It went on to say that this achievement confirms that the Syrian Arab Army, in collaboration with friends, is the only active force to fight terrorism and eradicate it, adding that the restoration of Tadmur  is a basis to expand the military operations against ISIS on many axes and to tighten the grip around the terrorists and break off their supply routes.

The Army Command affirmed that the Syrian army, in cooperation with the allied and supporting forces, is determined to continue its operations against ISIS, Jabhat al-Nusra and the other terrorist organizations until restoring security and stability to every inch of the homeland.