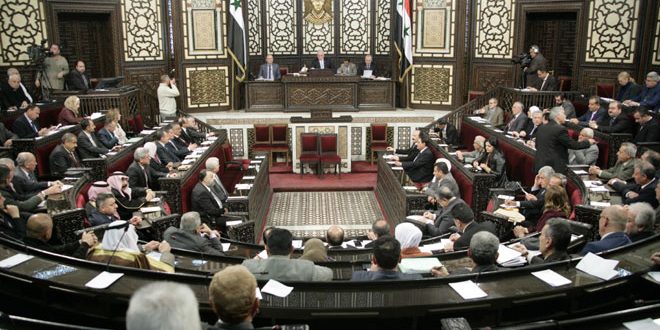 Damascus, SANA-The People’s Assembly discussed in a session held on Monday the performance of the Ministry of Awqaf (Religious Endowments) and issues related to it.

The Assembly members called for developing the religious discourse in the face of Takfiri mentality, noting to the important role of Awqaf Ministry in the intellectual awareness.

They also hailed the generous directive of President Bashar al-Assad, through which the Ministry of Awqaf offered a real estate area of 341 donums in Jableh city in Lattakia to be transferred to the locals, who include many families of martyrs and injured army personnel.

For his part, Minister of Awqaf Mohammad Abdul-Sattar al-Sayyed said that “the elimination of terrorism and extremism requires the development of religious institutions,” noting to the important role played by scholars and religious figures in the provinces, mainly in the field of local reconciliations.

As for restoring the damaged mosques, the minister clarified that the ministry has a plan to rehabilitate the ruined mosques, adding that upon the directives of President al-Assad, the Umayyad Mosque in Aleppo will be restored.