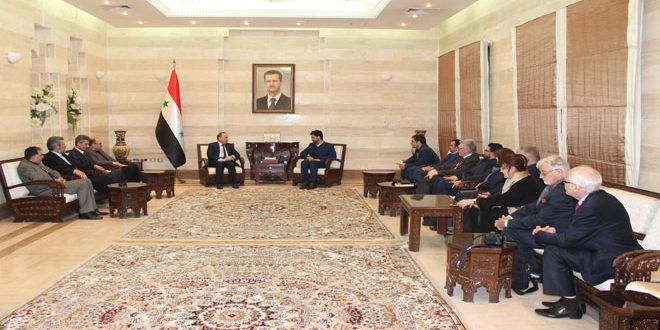 Damascus, SANA- Prime Minister Imad khamis met on Saturday a media delegation consisting of a number of co-participants in the issuing of a special edition of the international Maraya Lebanon magazine.

During the meeting, Khamis said that the media outlets of friendly countries have played a large role in exposing the falsehood of western media which targeted the region, affirming the Syrian government’s openness to all initiatives that prevent the shedding of Syrian blood and that alleviate Syrians’ suffering, pointing out to the steadfastness of the Syrian people and their rallying around their army and leadership.

The delegation members stressed that Syrian media and the media outlets of friendly countries have to continue exposing those who create and manufacture terrorism, in addition to tackling the important issues in the region.

Minister of Information Mohammad Ramez Tourjman also met with the delegation, saying during the meeting that the media outlets of the Resistance has succeeded in conveying the true image of what is going on in their countries. “The media of the resistance has succeeded to win the battle of the word and has been able to penetrate the Western public opinion and change its disposition and convey the truth about events,” Tourjman said.

He noted that the Syrian media has not been fighting alone, but has rather been accompanied with “a unified media front that started with the axis of the resistance in Lebanon and Iran along with many media outlets of the friendly countries.”

For their part, the delegation members appreciated Syria’s belief in achieving victory and highlighted the importance of media cooperation to deliver the true image of all aspects of the Syrian life to the outside world and not just the political and military aspects.

In a statement to SANA reporter, Director General and Editor-in-Chief of Maraya Lebanon magazine Fadi Boudiyeh said the magazine’s staff is interested in casting light on the resilience of the Syrian people in the face of terrorism and exposing the systematic destruction targeting Syria.

The magazine issues editions in the Persian and French languages beside the Arabic one. Its issues are distributed in Iran, Russia, Syria and Lebanon.

Later on, the launching ceremony of the international Maraya Lebanon magazine was held at the Drama theater at Damascus-based Dar al-Assad for Culture and Arts in the presence of media and official figures.

The first edition included interviews with Syrian officials and prominent foreign figures who underlined the key role of state institutions in supporting the steadfastness of Syria against terrorism which targeted the intellectual, economic and social sectors.