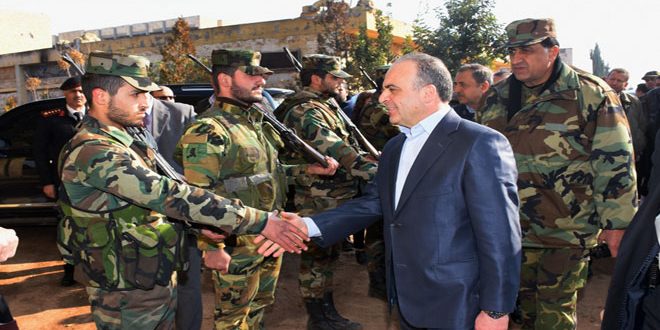 Aleppo, SANA – Prime Minister Imad Khamis on Wednesday visited an Army and Armed Forces unit operating in Aleppo province, where he was briefed on the task the unit is carrying out in the war on terrorism.

Khamis relayed to the soldiers the greeting of President Bashar al-Assad, saying that the soldiers’ sacrifices have resulted in a historical victory in Aleppo that will soon spread across all of Syria.

The Prime Minister asserted that security and stability will be restored to every inch of Syria which will be rebuilt, adding that history will record that Syrians defended their homeland from the most vicious terrorist onslaught in history.