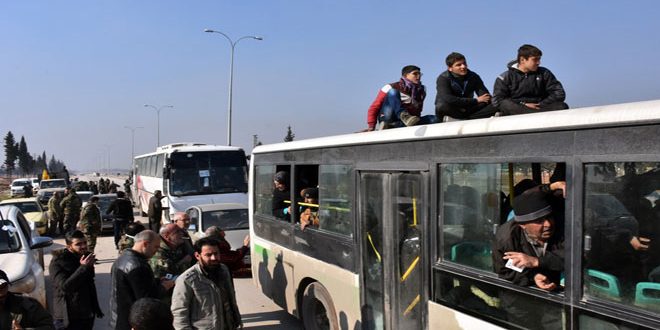 Aleppo, SANA-Two buses transporting humanitarian cases and families from terrorist-besieged towns of Kefraya and al-Fouaa in the northern countryside of Idleb arrived on Thursday to al-Ramousa crossing south of Aleppo.

SANA reporter in Aleppo said that the two buses transported around 100 women, children, injured and ill people from Kefraya and al-Fouaa towns under the supervision of the Syrian Arab Red Crescent (SARC) and the International Committee of the Red Cross (ICRC), pointing out that all of them have been transported to Jibrin temporary housing center which Aleppo Governorate prepared with all basic equipment.

In the same context, hundreds of terrorists and their families were evacuated from the neighborhoods of al-Zibdiya, al-Mashhad, Salah Eddein and al-Ansari towards al-Rashideen area southwest of Aleppo city.

The reporter added that the evacuation process of terrorists and their families from the eastern neighborhoods of Aleppo will continue till clearing the city completely of armed aspects to announce Aleppo city free of weapons and militants, and then to dismantle explosive devices and mines in all neighborhoods for the rebuilding process to set in motion.