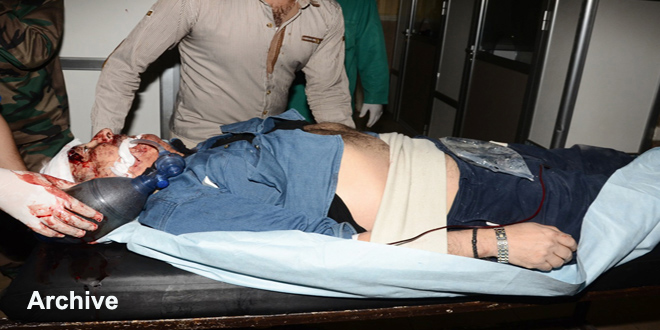 Aleppo, SANA – Eight people were killed on Wednesday and 7 others were injured in rocket shells fired by the terrorist organizations on a number of residential neighborhoods in Aleppo City.

A source at Aleppo Police Command told SANA that terrorists fired several rocket shells on the neighborhoods of al-Azamyieh, Saif al-Dawla, Halab al-Jadida and al-Furqan, killing 8 people, including two children, and injuring 7 others.

The source added that the attack also caused a material damage to the citizens’ houses and properties.

One civilian sustained gunshot wounds due to a sniper shooting attack by terrorists of “Jaish al-Fatah” on the besieged al-Foua town in the northern countryside of Idleb province.

Local sources in the town said in a phone call with SANA reporter that the source of the sniper shootings was terrorists positioned in Binnesh town, confirming that a man was injured in the attack.