Terrorists in Aleppo extorting locals, asking them to pay money to let them leave 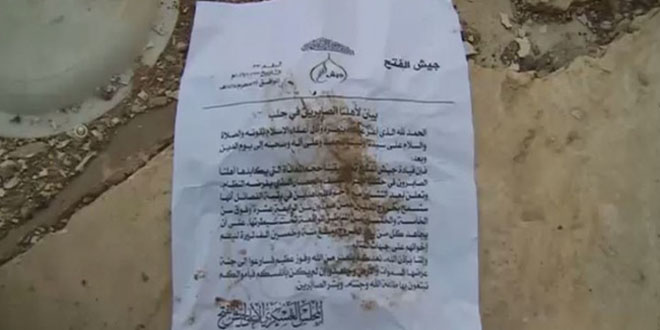 Aleppo, SANA – Terrorists of Jaish al-Fateh that are located in the eastern neighborhoods of Aleppo city are demanding that locals they are using as human shields and who want to leave the area pay large sums of money in order to release them.

A video which was circulated on social media pages showed copies of a statement issued by the terrorist organization in which it announced that it will allow citizens who are under 14 years of age and over 55 to exit the eastern neighborhoods if they pay them SYP 150,000 per person.

The terror organization openly announced that it will use the money to buy weapons and ammo, which will be used to commit more crimes against innocent Syrians.