Five civilians injured in terrorist attacks in Quenitra and Idleb 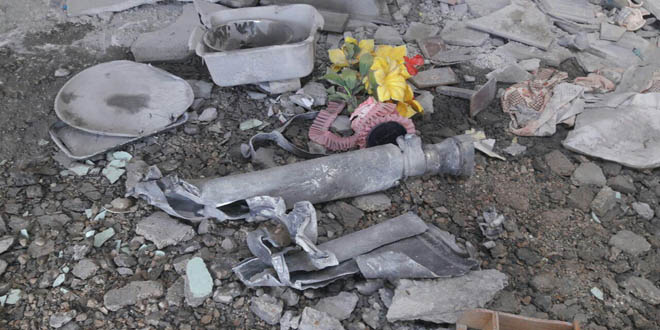 Quneitra/Idleb, SANA – Two civilians were injured, including a woman, in a terrorist rocket attack on Harfa village in the countryside of the southern Quneitra province.

SANA reporter quoted a source at Quneitra Police Command as saying that Jabhat al-Nusra terrorists positioned in Mas’hara village targeted on Tuesday afternoon Hafra village with 10 Grad rockets, with one of them hitting in the surroundings of the Health Center.

The source confirmed that two people were injured in the attack, including a woman, adding that huge material damage was caused to houses and public and private properties in the areas where the rockets hit.

Meanwhile, three civilians got injured when terrorists of the so called “Jaish al-Fatah” targeted the terrorist-besieged town of Kefraya in the northern countryside of Idleb with heavy machineguns.

Locals of the two adjacent towns of Kefraya and al-Fouaa have been for several years suffering from a crippling siege imposed on by terrorist organizations, which continuously target the two towns with rockets, mortars, gas-cylinder bombs and sniper fire, claiming the lives of many people and wounding others, mostly women, children and elderly people.