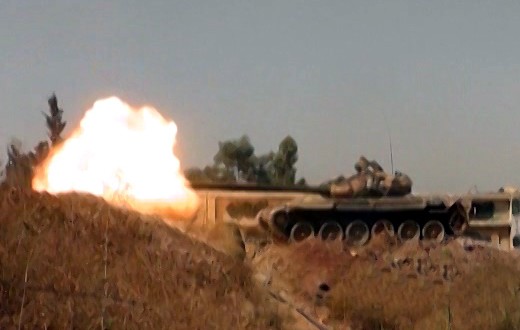 Provinces, SANA-Army units on Saturday continued to launch wide-scaled military operations against dens and positions of the Takfiri terrorist organizations in different areas across the country, regaining new areas and  inflicting heavy losses upon them in the arms and personnel.

A military source announced Saturday full control over Handarat Camp to the northeast of Aleppo, after eliminating the last gathering of terrorists.

The source told SANA that army units in cooperation with supporting forces regained full control over Handarat Camp, killing dozens of terrorists and destroying their weapons.

“Engineering units are dismantling mines and explosives planted by terrorists and the army is consolidating positions in order to broaden operations against terrorists in the area,” the source added.

Later, a military source said that army units destroyed two 4WD vehicles equipped with heavy machineguns and a 23mm gun and eliminated a number of ISIS terrorists in the surroundings of the Air Force Academy in Aleppo’s eastern countryside.

Army units carried out concentrated strikes against dens and gatherings of the terrorist organizations in Daraa al-Balad area.

A military source told SANA that over the past 24 hours, army units carried out special operations against dens and gatherings of the terrorist organizations in al-Hammadin neighborhood and to the east of the LG Building in the western part of al-Nazehin Camp.

The source added that a number of terrorists were killed in the operations and others were injured and one of their dens was destroyed in the surroundings of al-Masri roundabout.

The military source said the army units are fighting fierce battles against Jabhat al-Nusra and other terrorist organizations linked to it in the surroundings of Maan and al-Kebbariyeh towns and have consolidated their defenses in Karah area in the northern countryside of Hama province.

A military source told SANA that an Army and Armed Forces unit destroyed 3 cars equipped with 23mm guns and targeted a terrorist group that was building fortifications north of Oum Sharshouh citadel and north of Talbiseh in Homs countryside.

Later, the source said an army unit thwarted an infiltration attempt by ISIS terrorists from Unq al-Hawa towards Jub al-Jarrah in the eastern countryside of Homs, eliminating a number of terrorists in the process.

A military source told SANA that the Syrian Air Force destroyed a number of vehicles, some of them armored, and eliminated a number of terrorists in Khan Sheikhoun and al-Tamani’a in Idleb countryside.