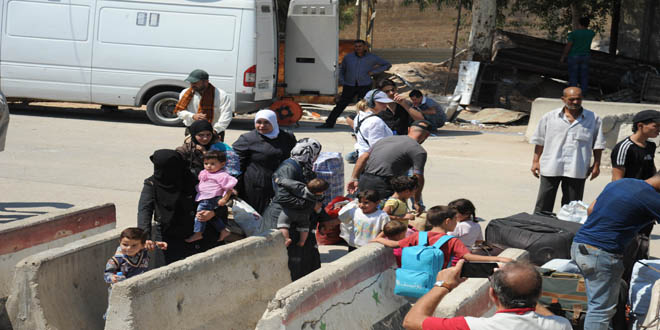 SANA reporter said that 127 persons from Daraya city who were residing in al-Moaddamiyeh city were transported to the makeshift center in Harjalleh that Damascus Countryside governorate has equipped with all basic requirements and relief substances.

In a statement to reporters at the entrance of al-Moaddamiyeh city, Governor of Damascus Countryside Eng. Alaa Ibrahim pointed out that the agreement of Daraya city will be ended soon after evacuating the civilians residing in al-Moaddamiyeh successively and the militants who want to settle their situation and take advantage of the amnesty decree No. 15 for 2016 to the makeshift center in Harjalleh town to return to their normal lives in addition to taking the rest of the militants out towards Idleb.

With regard to the agreement of Moaddamiyehit al-Sham city, Ibrahim said that the agreement is similar to the settlement of Daraya city. However, the locals of al-Moaddamiyeh will stay in their houses, the legal status will be settled for the militants who want to and those who don’t want will be transported to Idleb, adding the governmental institutions will return to the city.

The Governor called on all militants to lay down their arms and take advantage of the amnesty decree.

In turn, Chief of Daraya municipality Marwan Obeid said in a statement to SANA reporter that the second phase of Daraya agreement has been accomplished today after evacuating about 344 persons to Harjalleh in the first phase, adding that the remaining number of the people in al-Moaddamiyeh city is around 1700 persons.

Obeid affirmed that the properties of the families of Daraya are preserved, adding that huge amounts of money are dedicated to rehabilitate the infrastructure.

For his part, Bassam Karbouj, head of al-Moaddamiyeh City Council said that work is going on to find a final solution to the issue of the city despite the problems and obstacles that face the agreement by some terrorists who want to foil the local reconciliation.