Russian Foreign Ministry: Any operation in Syria must abide by international law 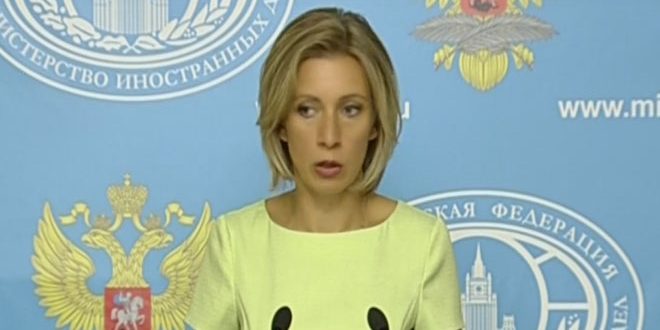 Moscow, SANA – Russian Foreign Ministry spokeswoman Maria Zakharova stressed the need for any operation in Syria to abide by international law and to be carried out in coordination with the Syrian government, adding that any operation against terrorists mustn’t target civilians.

In a press conference on Wednesday, Zakharova hoped that the successful experience of clearing Daraya in Damascus Countryside from militants will be expanded in other areas, stressing that this experience must be supported by the international community, noting that this achievement means removing one of the main hotbeds of armed groups southeast of Damascus.

She also underlined the need to resolve the issue of separating terrorists from so-called “moderate opposition,” adding that the US actions regarding the situation in Syria are chaotic and inconsistent, and that the Americans are firing from both hands in unknown directions and at unknown targets.

Zakharova called on the Turkish regime which is carrying out a military aggression on Syrian territory in Jarablos under the pretense of fighting ISIS to “choose its targets carefully” and to not carry out arbitrary attacks, including areas where Kurds are present.

She said that Russia is watching the Turkish operations in northern Syria carefully, affirming that the most pressing matter right now is fighting terrorism with unison among all relevant sides.