Ryabkov: Humanitarian operation in Aleppo has no goals other than solving its residents’ problems 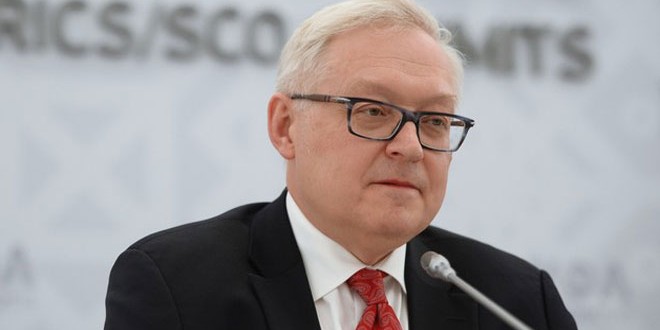 Moscow, SANA- Russian Deputy Foreign Minister Sergei Ryabkov ruled out any other goals of the humanitarian operation in Aleppo except finding solutions to the problems faced by its residents and extending the cessation of hostilities in the city.

Ryabkov told the reporters on Wednesday that there are speculations towards Russia’s humanitarian operation in Aleppo, adding “we repeat again that we have no goals other than solving humanitarian problems faced by the residents of Aleppo and creating conditions to extend the ceasefire regime.”

He stressed that there are no plans for an offensive in Aleppo neither by Syrian forces nor through airstrikes by the Russian Aerospace Forces, adding “absolutely false and harmful interpretations of our actions are voiced by certain circles in Washington.”

Earlier, the Russian diplomat described the American statements on Russia’s role in Syria as “hateful,” asserting that the U.S. demanded to stop fighting the terrorists in Syria, accusing the US of following “banned tricks” immediately after the Syrian army, in cooperation with the Russian Aerospace Forces, achieved tangible advance in fighting the terrorist organizations.

On the humanitarian operation led by the Syrian and Russian forces in Aleppo, Ryabkov said that Russia invited the US to cooperate when the operation first started, pointing out that the invitation is still open.