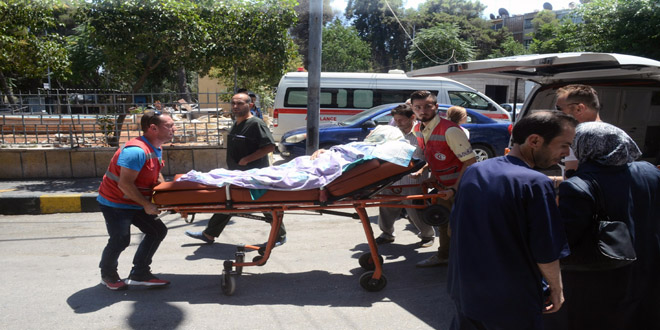 Aleppo, SANA_ Terrorist groups, mostly affiliated to Jabhat al-Nusra and the so called Ahrar al- Sham, targeted residential neighborhoods of Aleppo city in their continued attempts to obstruct the truce (regime of silence) announced by the General Command of the Army and Armed Forces.

A source at Aleppo Police Command told SANA reporter in Aleppo that eight civilians were killed and more than 80 others were injured in Aleppo on Sunday night by terrorists’ attacks.

The source added that terrorist groups targeted most of the residential neighborhoods of Aleppo with tens of explosive bullets and rocket shells killing 8 civilians and injuring more than 80 others, some of them in critical condition.

Earlier today, the source said 5 civilians were killed and 61 were injured in terrorist attacks against residential neighborhoods of the city

The terrorist attack also caused material damage to private and public properties and the destruction of some locals’ houses.

Earlier, 11 civilians, including 3 children, were injured in terrorist attack against residential neighborhoods on Aleppo city.