Cooperation in investment and trade exchange between Syria and Brazil discussed 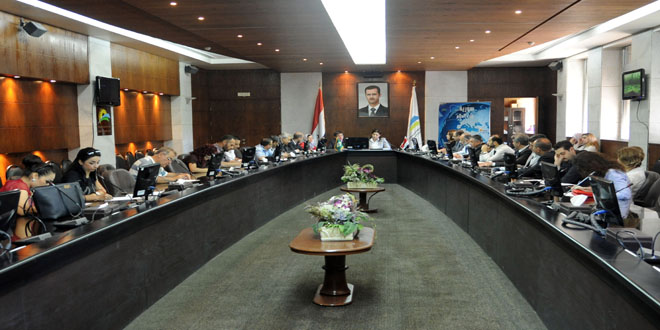 Al-Omawi reviewed investment opportunities and the proposed fields to invest in energy, renewable energy, reconstruction requirements and other sectors, pointing at the same time the depth of the economic relations between the two friendly countries especially in trade exchange.

Al- Omawi said that the proposed investment areas include the project of implementing electro solar generating station with capacity of 5 MW in Hasia area, adding that the other projects are in agriculture, industry and transport sectors, noting that the SIA aims through its work at searching for new partners from friendly countries, including the BRICS group and preparation of a complete investment map.

For his part, the Brazilian charge d’affaires pointed out the long history of strong political and economic relations between the two countries, noting at the same time that many Brazilian businessmen were unable to pursue their economic activities and investment in Syria due to the sanctions imposed on it by some countries since the beginning of the crisis.

Zaluar said that the two countries have to join efforts and work together along with businesses and chambers of commerce to prepare for the return of Syria to normal and the start of reconstruction and development projects, infrastructure, agriculture, transport, construction, and building roads, affirming that many Brazilian companies are able to invest in the mentioned fields.

Zaluar pointed out the need to publish information about opportunities and the Syrian investment map for the companies wishing to invest in Syria to know these opportunities, noting the importance of meeting between businessmen in Brazil with their counterparts in Syria in addition to the SIA in order to save time and effort when implementing any new investments.