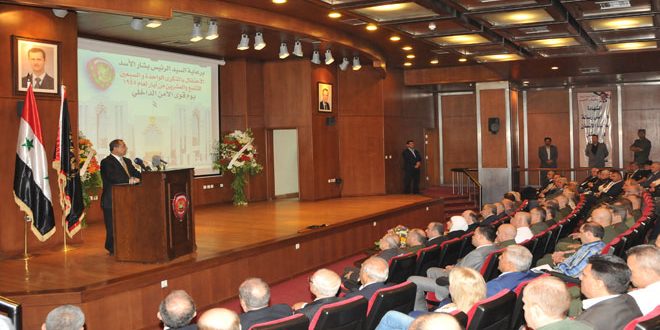 Damascus, SANA- Under the auspices of President Bashar al-Assad, the Interior Ministry marked the 71st anniversary of the Internal Security Forces’ Day as a commemoration of the parliament’s guards and internal security members who were martyred by the French occupation in 1945.

In a speech during a ceremony organized on the occasion, Interior Minister Lt. Gen. Mohammad al-Shaar said the occasion commemorates a day that represents the will of the nations, noting that celebrating this anniversary is devoted to glorifying the values of martyrdom and the sublime meanings of giving.

The Minister added that Syria which suffered from colonialism throughout its history will not compromise on its dignity, independence, sovereignty, unity and territorial integrity, stressing that the terrorist bombings and shells that have targeted cities, towns and villages will not impair the steadfastness of the Syrians but will make them more determined to combat terrorism.

Al-Shaar hailed the efforts of the Internal Security Forces, their dedication in fighting terrorism and serving their people.