Five civilians killed, others injured in terrorist rocket attacks in Aleppo and Idleb 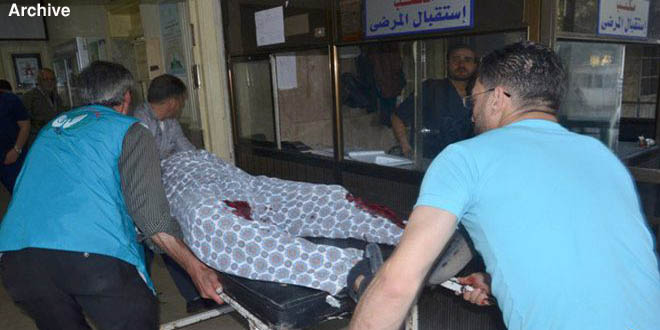 Aleppo/Idleb, SANA- In a new breach to the cessation of hostilities, terrorist groups targeted with rocket shells Bustan al-Zahra and al-Martini neighborhoods in Aleppo city.

A source at Aleppo Police Command told SANA reporter that the terrorist groups fired on Monday morning a rocket shell on the citizens’ houses in Bustan al-Zahra neighborhood, killing a woman and injuring 3 other people, in addition to causing material damage to the properties.

Later on Monday, terrorist groups targeted the residential buildings in al-Martini neighborhood with a rocket shell, killing a woman along with her daughter and causing material damage to properties.

Since the cessation of hostilities agreement entered force on February 27,the terrorist groups breached it 585 times.

The agreement does not include ISIS, Jabhat al-Nusra and other terrorist groups listed on the international terrorism list.

In the same context, two civilians were killed and 6 others were injured due to terrorist rocket attacks that targeted the besieged town of Kefraya in the northern countryside of Idleb province.

A woman and a young man were killed and 6 other people were injured in the shelling, the sources confirmed, noting that the two women were among the injured.

The attacks caused massive material damage to houses and private and public properties.