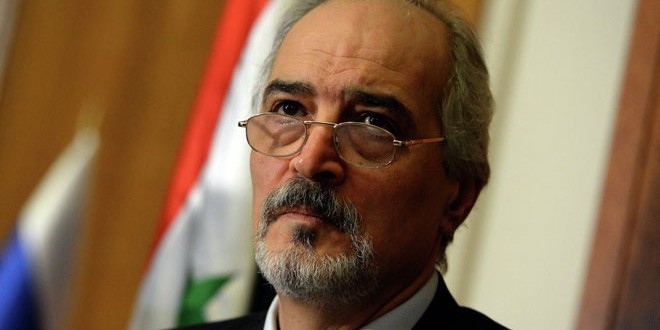 During the meeting, al-Jaafari and Xie discussed the process for the political settlement of the crisis in Syria and potential mechanisms for overcoming the obstacles that hinder dialogue and for achieving tangible results in the current round of dialogue.

Al-Jaafari welcomed the Chinese government’s decision to appoint a Special Envoy for Syria, saying that this important step proves Beijing’s seriousness and commitment to resolving the crisis in Syria, adding that Syria is looking forward to benefiting from China’s important role in the political process.

He that what is happening in Syria is a terrorist world war, and that the crisis wouldn’t have lasted for five years without foreign interference, stressing that the priority is fighting terrorism as it poses a threat to the entire world, noting that there are Uyghurs fighting alongside ISIS and al-Nusra, something which forms a common denominator between Syria and China in terms of fighting terrorism.

Regarding the position of the “Riyadh opposition” on suspending their participation in dialogue, al-Jaafari said that the postponement decision was made upon orders from their Saudi employers as that group has no political independence, noting that they always resort to threats of postponement or walking out at the start of each round of indirect talks because they’re not serious and don’t want to become part of the political process, nor do they want the peaceful solution to succeed.

“The Riyadh group includes extremists and Takfiris who embrace the Wahabi ideology which forms a fertile soil for international terrorism, and they don’t believe in the secularism of the Syrian state,” he said, asserting that terrorist groups are breaching the cessation of hostilities agreement in a bid to poison the atmosphere of the talks in Geneva and obstruct the political process, adding that this is proven by the provocative statements by some figures in the Riyadh group on the need to breach the cessation of hostilities, attack the Syrian Arab Army, and shell cities.

For his part, Xie stressed the importance of maintaining coordination, particularly in fighting terrorism, lauding Syria’s cooperation regarding the Uyghur terrorists fighting alongside terrorist groups in Syria.

The Chinese Envoy also underlined the importance of continuing dialogue and trying to achieve progress in the current round of talks, reiterating China’s principled position which respects Syria’s sovereignty, the unity of its people, its territorial integrity, and the principle that Syrians alone must decide Syria’s future without foreign interference.

Al-Jaafari held other meetings on the sideline of the third round of talks, meeting Russia’s Permanent Representative to the UN in Geneva Alexey Borodavkin, Japanese non-resident chargé d’affaires for Syria Futoshi Matsumoto, and Iranian special envoy to the Geneva talks Hamid Reza Dahqani, exchanging viewpoints with them, discussing the proceedings of the current round of dialogues, and briefing them on the paper presented by the Syrian Arab Republic to the UN Special Envoy for Syria.