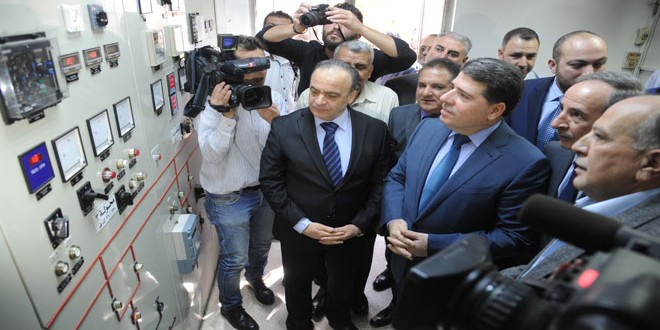 Damascus, SANA – Prime Minister Wael al-Halaqi opened on Sunday a number of vital and development projects and laid the foundation stones of others in Dummar, Sahnaya, Ashrafiyet Sahnaya in Damascus and its countryside with a total value estimated at SYP 4 billion.

The projects include the re-opening of Dummar power transformer substation that is worth SYP 1 billion and laying the foundation stones of a permanent substation in Ashrafiyet Sahnaya of 66/20 KV capacity and with a total value estimated at SYP 2.500 billion and of a polyclinic center in Sahnaya with an overall value of SYP 325 million.

The inauguration of the projects came upon the directions of President Bashar al-Assad on the occasion of the 70th anniversary of Evacuation Day (Syrian Independence Day, which marks the evacuation of French occupation forces from the country in 1946).

“This is further proof of the vitality and resilience of the Syrian people who are fighting terrorism with one hand and building and reconstructing with the other,” al-Halaqi said in a statement to reporters.

Dummar substation, which operates with a capacity of 230/66/20 KV, is one of the 9 main substations supplying Damascus city with electricity. The reopening is expected to contribute to increasing capacity and accordingly reducing rationing hours in Damascus.