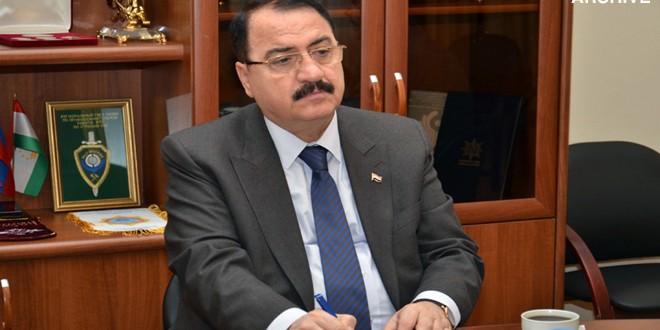 Moscow, SANA – Means of combating terrorism and unifying efforts to reach this goal were the main topic of the roundtable discussion organized by the Syrian Embassy in Moscow on Saturday.

Well-known Russian political, military, academic, and social figures, including researchers and analysts specializing in the Middle Eastern affairs in general and Syria in particular, participated in this event.

Syria’s Ambassador in Moscow Riyad Haddad stressed that the key point is to combat terrorism which threatens the entire world, noting that ending terrorism depends mainly on drying up its resources, including the Takfiri Wahabbi mentality funded by the Al Saud regime which has deployed regional and international intelligence agencies to sponsor ISIS and other terrorist organizations.

Haddad underlined Russia’s essential role in confronting terrorism in Syria, hailing the sacrifices of the Syrian Arab Army personnel in cooperation with their Russian counterparts to defeat terrorism.

For his part, Chairman of the Russian-Syrian Friendship Association Alexander Dzasokhov said that combating terrorism is not Syria’s fight alone, adding that the international community should cooperate with Syria, while head of the Academy of Geopolitical Sciences in Russia, General Leonid Ivashov, said that terrorism is considered an ideological tool in the wars that erupted in the Middle East, adding that after five years of confronting terrorism-based plots, Syria’s steadfastness will change the rules of how matters are dealt with in the new world order.

In turn, Director of the Institute for African Studies of the Russian Academy of Sciences Alexey Vasiliev said priority should be given to confronting ISIS, Jabhat al-Nusra, and other terrorist organizations, noting that the unity of the Syrian people, army, and leadership caused the West to change its positions.

For his part, the Advisor to the Deputy Chairman of the Federation Council of the Russian Federation Andrey Baklanov said that Turkey’s positions are biased in favor of some terrorist organizations, and that there are problematic issues related to the figure of Turkey’s President Recep Tayyip Erdogan which need to be addressed.

At the conclusion of the discussion, Haddad said “We don’t feel reassured about any American initiative, but when a Russian-American initiative is discussed, we feel comfortable due to our confidence in the Russian side.”

The Syrian Ambassador underlined the positive outcomes of the all Russian initiatives starting with disposing of chemical weapons, the first and second Moscow meetings, and the Geneva meetings organized in coordination with Syria, noting that consultations between Damascus and Moscow were held prior to the recent Russian-American agreement.

Haddad drew attention to the Syrian Arab Army’s successful operations against positions of ISIS and other terrorist organizations, underlining the importance of the Russian airstrikes in supporting these operations.

Regarding the upcoming parliamentary elections in Syria, Haddad said that this constitutional step is a must, and the Syrian government has to fulfill its obligations in terms of implementing the constitution.

He added that the Syrian government will commit to the outcomes of the intera-Syrian dialogue in a way that maintains the principles of Syria’s territorial integrity, sovereignty, dignity, and the unity of its people.